“What is church membership?” Well, before that question can be answered, one must know the answer to the question, “What is church?”

It surprises most people to learn the word church was only used three times in the gospels (once in Matthew 16, and twice in Matthew 18). Certainly, the word is used more commonly by Paul in many of his letters as well as in Hebrews, James, John’s letters, and Revelation. The word itself is “ekklessia” which means “called out ones.” While the work originally meant people called out in a gathering (such as a public assembly), the double entendre certainly applies to Christians being called to live in, but not of, the world.

Shortly after the Protestant Reformation in 1517, a confessional statement known as the Augsburg Confession was created (in 1530). Article 7 defined the church as “the congregation of the saints in which the gospel is rightly taught and the sacraments are rightly administered.” This type of sentiment has been echoed for centuries. In summary, and in part, the current Baptist Faith and Message (2000) says this of the church in Article 6. A church consists of believers who:

Yet, in our day, we have turned church into a place instead of a people. There is a history to this (largely based on the German word, kirche), but the word misappropriated the intent of Jesus. So, church is not a place, it is a people gathered for a purpose. If that is the case, what is the purpose? A brief look at three of Jesus’ statements about His church can help to provide an understanding.

Jesus never said, “Go to church.” He never said, “Be the church.” Rather, He said something even more profound, “Follow Me.” Of course, in learning to follow Jesus we will become who He wants us to be and desire to be with others who are learning to do the same. But the focus was on following Him, not going to a place. Here are three important statements that Jesus did say regarding His Church and His people:

But being a member in the Kingdom takes more commitment than being a member of a church, at least the way modern Christianity has come to understand church membership. To keep it simple, three levels of involvement (at the most) may be found in most churches. These three levels are fellowship (relational), membership (commitment), and discipleship (determined).

Most everyone wants to feel accepted – to belong. This is the fellowship aspect. Some are willing to get involved and commit to a local gathering. Few are willing to go to die to self in order to truly be a disciple. Yet, this is what Jesus desired – “Follow Me.” Unfortunately, in our world today, the committed (members) are less and less committed. Also, church leaders (self-included) generally tend to make disciples out of those who are already members. This approach may be a starting approach, but this should not be the only way. In fact, it wasn’t for Jesus!

It must also be understood that these three levels are not mutually exclusive. 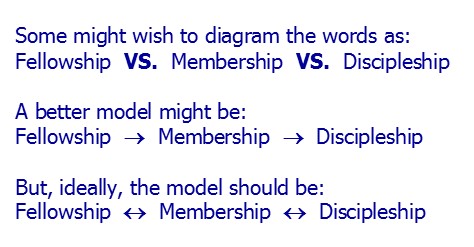 Jesus calls us to make disciples (Matthew 28.18-20). We can be members of a church without being a disciple, but we cannot be a disciple without being in fellowship with other believers which effectively makes us members of a church. True members are in fellowship with one another, are committed to one another, and help to disciple one another. Unfortunately, for many in today’s world where independence reigns supreme, people don’t want this level of involvement, and therefore not only turn away from discipleship and membership, but often turn away from the fellowship as well. However, it has been said that the New Testament knows nothing of a Christian who is not a part of a local church.

Certainly, Jesus was concerned about unity (John 17.11,20). Jesus modeled life so His disciples could also model for others (see Paul, 1 Corinthians 11.1). These men and women learned what it meant to follow Him, so that eventually they could lead others. The early church wasn’t about membership so much as was about community. People wanted to be in community with one another. Today, people are often defined by the organizations which they support (whether good or bad), and some people just want their name affiliated with something. “I am a member of the…” Yet, almost any organization has more stringent requirements (at least annual dues) than most churches expect from their “members.”

We hope you will join us as we begin to re-orient our membership towards a more biblical understanding. Specifically, we are “called out” to:

In 2014, Andy preached a message on each of these topics as it relates to our church strategy. If you would like more information about any, or all, of these topics, most of the sermons can be found online at our Audio Page (Connect Menu). Within the audio player, scroll down to the sermons dated in June and July of 2014. Due to technical issues at the time, some of the sermons are not located there, so you may request a written document of the content by sending the church a letter or emailing the church at fairfaxmobaptistchurch@gmail.com.

This is an exciting time to be a member of Fairfax Baptist Church as we seek to fulfill our vision: To Know Christ and to Make Him Known. To do that, it will not take a lot of people, it will just take people who are committed to seeing what God is ready to do. We welcome you to be a part of the JOURNEY to which He has called us as a church. More importantly, we hope you will choose to be one of the people that chooses to respond to Jesus call to “Follow Me” wherever that may be.